Previously, I put down the heuristics I use to find authentic food. Being a student in Delhi, I’ve spent every weekend using them here. Now, after about four years, I think I have explored and understood the capital enough to have some preliminary conclusions.

One of the main reasons why India does not have authentic food from countries across the world is that being a developing country itself, it does not have too many immigrants as of now. However, that is not too big of an impediment for the supply of authentic food since India has twenty nine states, almost all of which have their own culture, language, cuisine.

Being the capital of the country, and a generally fast growing commercial centre, Delhi has managed to attract these migrants from the rest of the country, and is now the most populous city in the country. It was one of the larger and centrally located cities in the mid-20th century which also made it the ideal place for relocating partition evacuees and refugees from regions of Pakistan, East Pakistan, and Tibet. It is also the biggest city in North India, attracting in large numbers migrants from the North-east as well. These factors, among others, have put Delhi at arguably the top stop for finding the authentic food from the most number of cuisines.

Like many other things the concentration of authentic food also seems to follow a power law, i.e. a handful of areas/localities/pockets house a disproportionate number of authentic food restaurants. The following is a constantly updated list of such areas in Delhi;

Originally a Jat settlement hidden between Green Park and Sarojini, it’s now primarily occupied by migrants from the North-East. A cramped up colony with buildings upto 2-3 stories tall and small bylanes, it houses many Manipuri, Assamese, Tangkhul (Naga) and Mizo places. You can find tiny cafes, stalls, fancier restaurants with live performances, as well as cocktail bars, most of which offer authentic meals for a bargain. [View all reviewed restaurants in Humayunpur here]

Also often called Little Tibet, this is a colony of Tibetan refugees who took exile in India after the 1959 uprising. It’s a short rickshaw ride away from North Campus, and feels like a completely different world once you enter the market. Hawkers and street food sellers occupy most of the bylanes during the day, while after lunchtime people seem to be mostly there for the food. However, Majnu Ka Tila isn’t a secret anymore, so in the last few years restaurants have started including Punjabi and Indo-chinese food in their menus, making it harder to find the authentic tibetan place. Still with a little bit of research, and trial & error, it isn’t very hard to find. Also, most places there shut down by 10 – 10:30 pm, so if you want to try more things, do go early. [View reviewed places in Majnu Ka Tila here]

New Delhi is the capital of India, and all other States are mandated by law to have an office here. I’m not completely sure about what they do at these offices, but the good thing is that most of their staff is from their home state. With people, their food will follow. Most bhawans have canteens for their staff, most of which are open for the general public also. State Bhawans too aren’t a secret anymore, but food still seems to have stayed quite authentic. Many states also maintain ‘cultural centres’ in Delhi, which also have similar restaurants, however, they’re usually catering to general masses in the first place, and so I would guess that they’re not as authentic.

Just like State Bhawans, countries from around the world have embassies and cultural centres in Delhi. These are harder to gain access to, as most are not open to the general public, and the few that are, are open only for certain “members” or for only a few hours every week. However, if you’re able to gain access to these places, you’ll get the most authentic version of the food you’ll be able to find in Delhi.

Before Delhi took its current form as New Delhi, it used under the control of the multiple dynasties of the Delhi Sultanate and then the Mughal Empire.  The food most authentic to Delhi can be found in areas that used to be part of the walled city, usually called Old Delhi, and includes (Jama) Masjid-area, Chawri Bazaar, Chandni Chowk and Daryaganj. Now occupied mainly by muslims, Daryaganj and Masjid are famous for their mughlai food (kebabs, nihari, etc), with some recipes being passed down by royal chefs; and Chandni Chowk and Chawri Bazaar are famous for chaats, paranthas, chhole, and other dishes that came to Delhi from other parts of North and East India.

There are few more other potential hotbeds for authentic food that I’ve yet to try – markets of Chittaranjan Park for Bengali food, Punjabi food in Tilaknagar-Rajouri-Karol Baug, a different kind of Mughlai in Zakir Nagar, and a surprising proliferation of Afghan restaurants in Lajpat Nagar. I’ll find out more about these places as soon as possible. If you have any other recommendations, or want to accompany me in trying out these new places, do let me know. 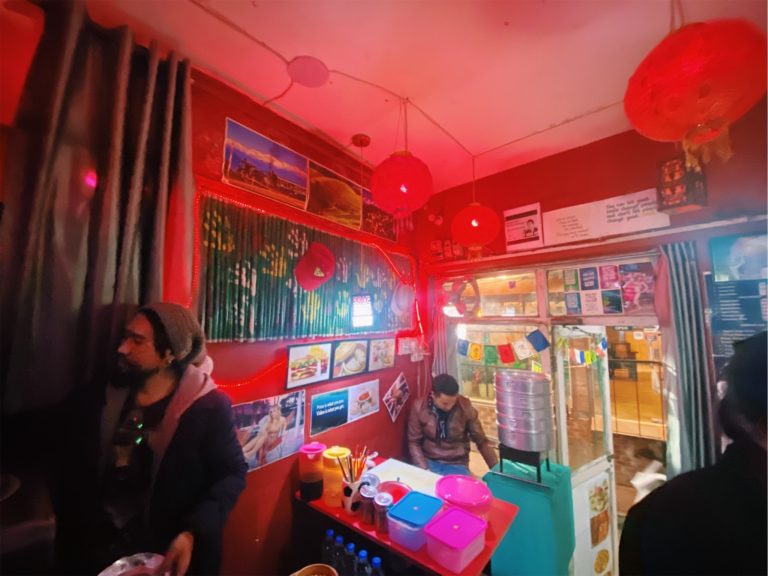 Appetisers and drinks in Humayunpur. It seems to be officially called Majnu Ka Tila La Phing by Jordan & Yeshi, but everyone in college calls it Jordan’s so that what I’m going with….